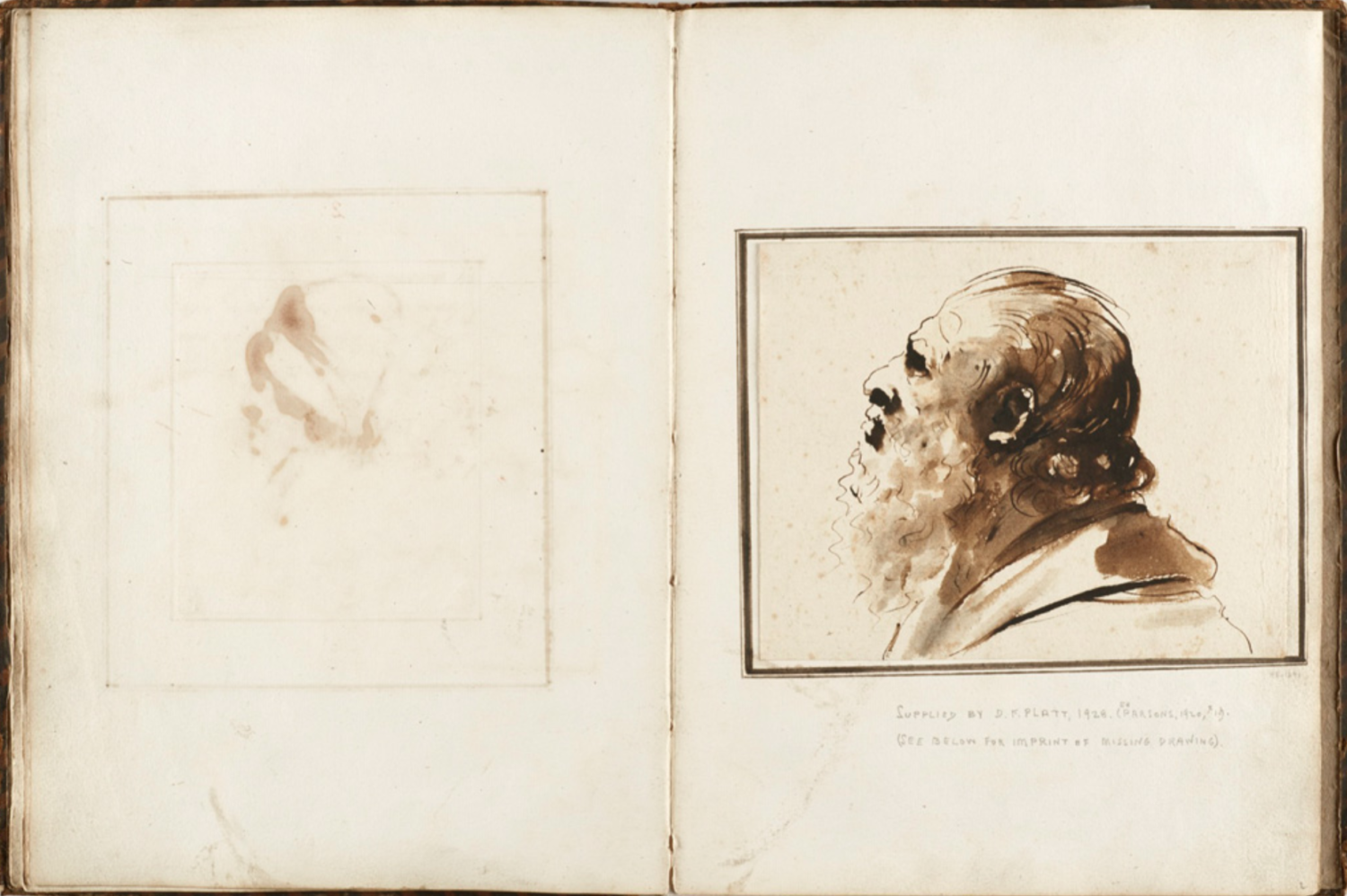 The Italian painter Giovanni Francesco Barbieri (1591–1666) is generally known by the nickname Guercino – which means “little squinter” – so named because of his strabismus. Perhaps Guercino’s own unusual, cross-eyed appearance, recorded in several surviving portraits, helped make him a particularly curious and sympathetic observer of odd and abnormal facial features. Influenced by the humorous portrait drawings created by Annibale Carracci (1560-1609), Guercino became an original and prolific caricaturist. The word caricature comes from the Italian caricatura, which means something “loaded” or “charged.” Caricatures are “loaded” insofar as they exaggerate specific features or make odd juxtapositions that emphasize differences. Guercino’s virtuoso caricature drawings, rendered with swift, spare, and expressive penstrokes, reveal the artist’s extraordinary ability to observe and capture on paper both the physical deformities and the psychological states of mind of many of his contemporaries.

This rare album, which was bequeathed to the Princeton University Art Museum by Dan Fellows Platt, Class of 1895, contains thirty caricature drawings, twenty-three of which can be confidently assigned to Guercino; these may be dated approximately to the 1630s or early 1640s. The album opens with a handwritten title page by an unknown hand that includes a pen and wash portrait of Guercino; this is followed by a three-page introductory essay, comprising a short biography of the artist and a brief discussion of the caricature genre. As can be inferred from the text of the introduction, the volume was most likely assembled in Bologna by a local painter sometime after Guercino’s death. In the first decades of the eighteenth century the album appears to have been recorded in an inventory of the vast collection of drawings and prints of Francesco Maria Niccolò Gabburri (1676–1742), a Florentine nobleman, diplomat, scholar, patron, and prominent collector. Gabburri added handwritten inscriptions in pen and brown ink on two pages of the album. One of these makes reference to Baron Philipp von Stosch (1691-1757), an antiquarian from Prussia who settled in Florence in 1731 and was one of Gabburri’s acquaintances. Sometime after Gabburi’s death his entire collection was sold to a British art dealer and transferred to England. According to several handwritten notations made on the flyleaf of the album, the volume later was in England and belonged to the British painter Sir Joshua Reynolds (1723–1792). In 1928, Dan Fellows Platt (1873-1937) purchased the album in London for thirty-five pounds. By then the volume had undergone various alterations and several of Guercino’s caricatures had been removed. In an attempt to restore the album to its original state, Platt added seven caricature drawings which were probably made by artists from Guercino’s school or by later imitators.