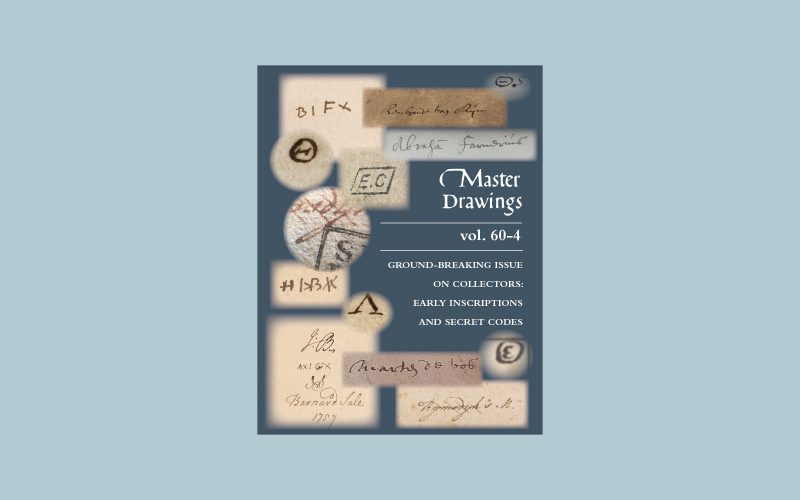 In their article they publish a revelation in seventeenth-century Dutch drawings scholarship: Rembrandt’s pupil Abraham Furnerius personally signed or inscribed the names of artists on some 50 drawings in a collection of more than 130 known sheets with mysterious Greek codes.

Such a discovery stands to have a profound impact on the field. Read the enlightening Q&A to learn more about the impact of these findings:

Q: What inspired you and your co-author Maud van Suylen, recently appointed a curator of drawings at the Rijksprentenkabinet, to take on the project of Abraham and Johannes Furnerius?

A: Some 30 years ago, I noticed a link between disputed signatures on drawings by Rembrandt’s pupil Abraham Furnerius and Greek codes inscribed at upper right—unexplained collector’s marks known to have been applied before the last quarter of the seventeenth century. As the late Ben Broos suggested, “Who else than the artist himself, or his proud father, could have inscribed the name so prominently on such sheets?” Since Abraham’s father, Dr. Johannes Furnerius, a medical doctor and organist in Rotterdam, was known to have had a posthumous sale of works on paper in 1668, I tentatively identified him as the collector of drawings with Greek codes.

At the time, there were only about 30 such coded drawings known, roughly half of them associated with Rembrandt. In the intervening decades, Maud assembled a group of 125 examples, increasing the holdings by an astounding 75%. So it was time for her to undertake a suitably skeptical review of my hypothesis.

Q: What was the biggest or most surprising discovery?

A: With breaking-news events, journalists are always keen to discover the secret tape or video, the “smoking gun,” so to speak. Here we have the next best thing: contemporary written testimony!

We were amazed to discover that 50 of the now growing list of 133 coded drawings presumably owned by Dr. Furnerius were actually signed or inscribed by his son Abraham.

Poor Abraham died in 1654 at the tender age of 26, so this is incredibly early written evidence. Although the “signatures” on his seven drawings with Greek codes had long been rejected as autograph, nowadays more archival documents are available online. This enables us to compare signatures on an array of documents. There are differences of course. But think how much your own handwriting varies over the course of days, weeks, months, years….

Once we established that the “signatures” on Abraham’s drawings were genuine, it was only at the last moment that we recognized that other artists’ names on coded drawings were also by him. A crucial image sent from colleagues in Hamburg had ended up in my SPAM folder. We found it in the nick of time. Here was Abraham’s quirky capital “A,” his consistent way of writing “van.” This proved that all the instances of drawings with Rembrandt’s name had been so labeled by his very own pupil, perhaps as early as the late 1640s when he was an apprentice.

Q: Why is this significant for Rembrandt scholarship?

A: To quote the song from the musical Hamilton, we’re talking about “The Room Where It Happens!” Abraham was “in the room” in Rembrandt’s studio in what is now the Rembrandt House Museum in Amsterdam. If he wrote Rembrandt’s name on ten drawings, chances are he got them from the master himself. (It is worth noting there are no drawings with the names of fellow Rembrandt pupils from the time of his apprenticeship.)

Yet the attribution of seven of these drawings with Rembrandt’s name has been questioned by at least one modern scholar. Maybe it’s time to reassess such doubts. Given Abraham’s contemporary testimony, have modern experts occasionally been too harsh in their judgments?

Q: What was the legacy of Abraham’s collection after Johannes continued the tradition?

A: We think that Abraham’s father had already started collecting drawings when Abraham was still a teenager. As a collector, Abraham would have been inspired by two other models, both artists: (1) his uncle, the artist Philips Koninck (who married his older sister Cornelia Furnerius in 1640), and (2) his master Rembrandt, whose renowned collecting activities may well have led to his bankruptcy in 1656. Abraham married in 1653, the year before his premature death. Yet even after his marriage his father continued to act as guarantor for loans taken out by him. It’s not a stretch to assume that Abraham’s drawings may have gone to his father rather than to his widow as collateral against an unpaid debt. Dr. Johannes evidently continued to collect, for there are works with Greek codes dated in the late 1650s and early 1660s, but none later than the doctor’s death in 1668.

Q: What do we know about the Greek codes, in addition to the inscriptions of artist’s names?

A: Here’s the fun bit. We still don’t know what we don’t know! So, CALLING ALL CODE-BREAKERS: We’ve got two challenges for you. In the same issue, Associate Editor Jennifer Tonkovich, writing about the Anglo-Dutch artist-collector Jan van Rymsdyk, identified another set of mysterious codes consisting of letters, numbers, and x’s. These she proved were written by the sculptor and print dealer Nathanial Smith. Help us decipher the meaning of both sets of codes.

Q: How can scholars in the field help further the investigation?

A: Maud, Jennifer, and I have invited curators, collectors, and dealers to let us know of new examples with Furnerius, Rymsdyk, and Nathanial Smith inscriptions and codes. (Check out the current lists of examples supplementing both articles on the Digital Resources page of our website.) Maud and I are especially eager to hear of other seventeenth-century inscriptions on the backs of drawings with Greek codes. And we’re inviting scholars with relevant information or experience to respond to Abraham’s attributions from the point of view of modern connoisseurship by next June 1st.

We very much hope in the process to spark a healthy art-historical debate (to be presented in the September issue of 2023)!

And a reminder to our dear subscribers: RENEW now to promptly receive your issues in 2023!  Highlights include issues on French drawings, Danish drawings, and the announcement of our annual Ricciardi Prize Winner.